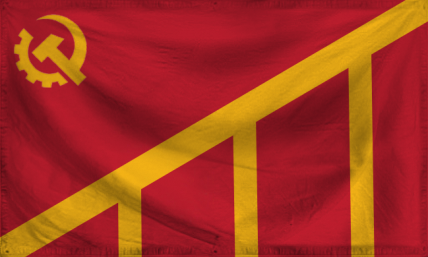 The People's Republic of Pajonia is a colossal, cultured nation, ruled by the Proletariat with a fair hand, and notable for its rampant corporate plagiarism, complete lack of prisons, and multi-spousal wedding ceremonies. The compassionate, democratic population of 7.594 billion Pajonians are free to do what they want with their own bodies, and vote for whomever they like in elections; if they go into business, however, they are regulated to within an inch of their lives.

The enormous, liberal, socially-minded government juggles the competing demands of Education, Healthcare, and Administration. The average income tax rate is 91.5%, and even higher for the wealthy.

The frighteningly efficient Pajonian economy, worth 975 trillion Pajonian Credits a year, is driven entirely by a combination of government and state-owned industry, with private enterprise illegal. The industrial sector, which is quite specialized, is mostly made up of the Information Technology industry, with significant contributions from Tourism and Book Publishing. Average income is an impressive 128,460 Pajonian Credits, and distributed extremely evenly, with practically no difference between the richest and poorest citizens.

Citizens are permitted to carry concealed handguns, the military is on a massive recruiting drive in advance of an invasion of Brasilistan, visitors often mistake the toiletplex at music festivals for the main stage, and much of Pajonia's computer network is controlled by a rampant artificial intelligence. Crime is totally unknown. Pajonia's national animal is the soweli, which frolics freely in the nation's many lush forests, and its national religion is State Atheism.

Pajonia is ranked 7,737th in the world and 128th in The Communist Bloc for Smartest Citizens, with 104.7 quips per hour.