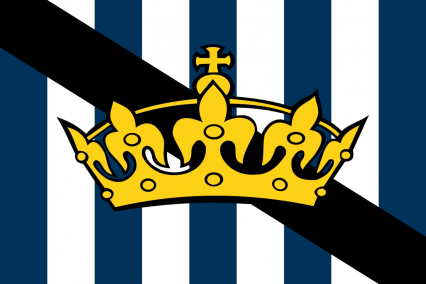 The Kingdom of Nottinghaven is a gargantuan, efficient nation, ruled by King Jalen II with a fair hand, and notable for its irreverence towards religion, punitive income tax rates, and devotion to social welfare. The compassionate, democratic, cheerful population of 10.838 billion Nottinghavians are free to do what they want with their own bodies, and vote for whomever they like in elections; if they go into business, however, they are regulated to within an inch of their lives.

The enormous, liberal government juggles the competing demands of Education, Industry, and Healthcare. It meets to discuss matters of state in the capital city of Alexandria. The average income tax rate is 96.9%.

The frighteningly efficient Nottinghavian economy, worth a remarkable 1,890 trillion Nottings a year, is quite specialized and led by the Tourism industry, with major contributions from Information Technology, Book Publishing, and Trout Farming. State-owned companies are common. Average income is an impressive 174,414 Nottings, and distributed extremely evenly, with little difference between the richest and poorest citizens.

The military recognizes no difference between male and female soldiers, King Jalen II's office has a newly installed Max-Man arcade game programmed by a 5th-grader, in life full of care there is no time to stop and stare, and there is something rotten in the state of Nottinghaven. Crime, especially youth-related, is totally unknown, thanks to a capable police force and progressive social policies in education and welfare. Nottinghaven's national animal is the Notting Wolf, which frolics freely in the nation's many lush forests.

Nottinghaven is ranked 10,127th in the world and 19th in Refugia for Most Scientifically Advanced, scoring 395.27 on the Kurzweil Singularity Index.

Most Recent Government Activity: 45 minutes ago

Remnants of the Pacific,