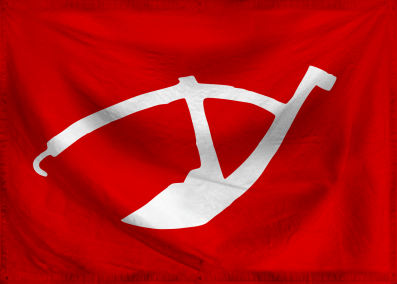 The People's Republic of Solova is a colossal, efficient nation, ruled by Workers with an even hand, and notable for its free-roaming dinosaurs, vat-grown people, and rampant corporate plagiarism. The compassionate, cheerful population of 7.816 billion Solovans are fiercely patriotic and enjoy great social equality; they tend to view other, more capitalist countries as somewhat immoral and corrupt.

The enormous, socially-minded government prioritizes Education, although Environment, Healthcare, and Administration are also considered important, while Defense and Spirituality aren't funded at all. It meets to discuss matters of state in the capital city of The People's Commune. The income tax rate is 100%.

The frighteningly efficient Solovan economy, worth a remarkable 1,857 trillion Solovs a year, is driven entirely by a combination of government and state-owned industry, with private enterprise illegal. The industrial sector is mostly made up of the Information Technology industry. Average income is an amazing 237,682 Solovs, and distributed extremely evenly, with practically no difference between the richest and poorest citizens.

The government's giant servers are often used as a tourist trap, the nation's museums are real penny-pinchers, the national guard is mobilized whenever a mother gets separated from her child at the mall, and Eau de Trashcan has become a wildly popular perfume. Crime, especially youth-related, is totally unknown. Solova's national animal is the Donkey, which frolics freely in the nation's many lush forests.

Solova is ranked 256,628th in the world and 1,750th in The Communist Bloc for Most Rebellious Youth, scoring -41 on the Stark-Dean Displacement Index.

The Reunification of Korea,

The Bon Fa Islands, and 34 others.