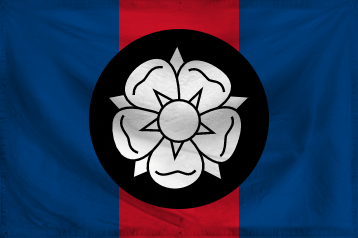 The Confederacy of Cadiona is a massive, socially progressive nation, notable for its free-roaming dinosaurs, smutty television, and devotion to social welfare. The compassionate, democratic population of 2.874 billion Cadionans are fiercely patriotic and enjoy great social equality; they tend to view other, more capitalist countries as somewhat immoral and corrupt.

The large government juggles the competing demands of Administration, Education, and Healthcare. It meets to discuss matters of state in the capital city of Terrania. The average income tax rate is 75.0%, and even higher for the wealthy.

The thriving Cadionan economy, worth 293 trillion ceals a year, is broadly diversified and dominated by the Information Technology industry, with significant contributions from Tourism, Cheese Exports, and Automobile Manufacturing. State-owned companies are common. Average income is an impressive 102,110 ceals, and distributed extremely evenly, with little difference between the richest and poorest citizens.

Things are looking up for patients accidentally prescribed erectile dysfunction medication, political clichés like "band-aid solutions" and "adrenaline shots to the economy" are headed for the dumpster, celebrities sit helplessly as they are labeled "pompous womples" by Leader, and a life spent suffering in silence is considered noble. Crime is totally unknown, thanks to a well-funded police force and progressive social policies in education and welfare. Cadiona's national animal is the bluejay, which soars majestically through the nation's famously clear skies.

Cadiona is ranked 35,577th in the world and 138th in Conch Kingdom for Most Developed, scoring 73.97 on the Human Development Index.