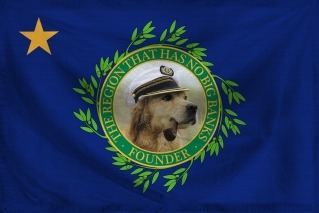 The Trading Card Doge of Yodle is a gargantuan, genial nation, ruled by Emperor Wuff with an even hand, and remarkable for its museums and concert halls, ban on automobiles, and devotion to social welfare. The compassionate, democratic, cheerful population of 13.768 billion Yodleans are fiercely patriotic and enjoy great social equality; they tend to view other, more capitalist countries as somewhat immoral and corrupt.

The large, socially-minded government juggles the competing demands of Education, Environment, and Healthcare. It meets to discuss matters of state in the capital city of Yodle City. The income tax rate is 100%.

The frighteningly efficient Yodlean economy, worth a remarkable 3,546 trillion Gold Coins a year, is driven entirely by a combination of government and state-owned industry, with private enterprise illegal. The industrial sector, which is highly specialized, is led by the Information Technology industry, with significant contributions from Book Publishing and Tourism. Average income is an amazing 257,619 Gold Coins, and distributed extremely evenly, with practically no difference between the richest and poorest citizens.

The nation is in perpetual campaign mode, intellectual snobbery has the cognoscenti sneering at anyone who doesn't have an opinion on the semiological drift of Umberto Eco's works, children as young as six shock their parents by coming out of the closet, and the nation's politicians are known more for the internet memes they spawn than any of their accomplishments. Crime is totally unknown. Yodle's national animal is the Human Race, which frolics freely in the nation's many lush forests, and its national religion is Yodlism.

Yodle is ranked 1,626th in the world and 2nd in The Region That Has No Big Banks for Most Advanced Public Education, scoring 21,212.95 on the Edu-tellignce® Test Score.

Mr Government, and 3 others.