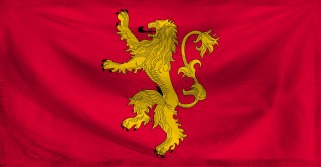 The Borderlands of LannisterPort is a gargantuan, cultured nation, remarkable for its rampant corporate plagiarism, compulsory military service, and irreverence towards religion. The hard-nosed, cynical population of 11.193 billion Lannisters are ruled with an iron fist by the dictatorship government, which ensures that no-one outside the party gets too rich. In their personal lives, however, citizens are relatively unoppressed; it remains to be seen whether this is because the government genuinely cares about its people, or if it hasn't gotten around to stamping out civil rights yet.

The enormous, corrupt, well-organized government juggles the competing demands of Defense, Healthcare, and Education. The average income tax rate is 92.4%, and even higher for the wealthy.

The frighteningly efficient a Lannister economy, worth a remarkable 1,482 trillion Golds a year, is quite specialized and led by the Information Technology industry, with significant contributions from Arms Manufacturing, Tourism, and Trout Farming. Black market activity is notable. State-owned companies are common. Average income is an impressive 132,478 Golds, and distributed extremely evenly, with little difference between the richest and poorest citizens.

A well-funded social safety net protects the unfortunate, nobody thinks that the Godfather was bettered by Part 2, professionals are ready to retire by the time they receive permission to use their credentials, and LannisterPort City has restaurants serving every meat from aardvark to zebra. Crime, especially youth-related, is totally unknown, thanks to a well-funded police force and progressive social policies in education and welfare. LannisterPort's national animal is the Lion, which frolics freely in the nation's many lush forests.

LannisterPort is ranked 125,973rd in the world and 4,296th in Lazarus for Most Average, scoring 37.1 on the Average Standardized Normality Scale.

Most Recent Government Activity: 31 minutes ago