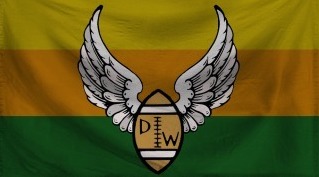 The Contrarian Country of The Double Wing is a gargantuan, environmentally stunning nation, ruled by Mister Head Coach with an iron fist, and remarkable for its frequent executions, ban on automobiles, and devotion to social welfare. The hard-nosed, cynical, humorless population of 27.364 billion Double Wingers are ruled with an iron fist by the dictatorship government, which ensures that no-one outside the party gets too rich. In their personal lives, however, citizens are relatively unoppressed; it remains to be seen whether this is because the government genuinely cares about its people, or if it hasn't gotten around to stamping out civil rights yet.

The medium-sized, corrupt government juggles the competing demands of Education, Administration, and Environment. It meets to discuss matters of state in the capital city of New Gridiron Majesty. The average income tax rate is 70.5%, and even higher for the wealthy.

The frighteningly efficient Double Wingian economy, worth a remarkable 5,394 trillion Pig$kins a year, is highly specialized and mostly comprised of black market activity, especially in Information Technology, Tourism, and Book Publishing. State-owned companies are reasonably common. Average income is an impressive 197,135 Pig$kins, and distributed extremely evenly, with little difference between the richest and poorest citizens.

You can't spell society without CIS, government theft from poor artists to give to rich allies has been dubbed the "reverse Robin Hood" policy, owning a really cute pet is grounds for immediate investigation, and crime is on the rise as DNA sampling has been all but outlawed. Crime is a serious problem, perhaps because of the country's complete lack of prisons. The Double Wing's national animal is the Double Wing'd Boar, which frolics freely in the nation's many lush forests, and its national religion is The Fellowship of the Wing.

The Double Wing is ranked 3,621st in the world and 45th in NationStates for Highest Poor Incomes, with 164,442.82 Standard Monetary Units.

Most Recent Government Activity: 17 hours ago