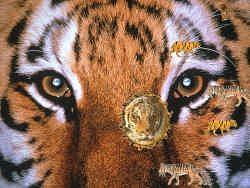 The Godless Mercantile Nexus of Isla Vista is a gargantuan, efficient nation, ruled by Colonial Premier Mawaar with an iron fist, and notable for its museums and concert halls, enslaved workforce, and spontaneously combusting cars. The hard-nosed, hard-working, cynical, humorless population of 42.257 billion Islanders are rabid consumers, partly through choice and partly because the government tells them to and dissenters tend to vanish from their homes at night.

The minute, corrupt, pro-business government, or what there is of one, prioritizes Industry, with Defense also on the agenda, while Environment and Welfare receive no funds. It meets to discuss matters of state in the capital city of Trigo. Income tax is unheard of.

The frighteningly efficient Isla Vistan economy, worth an astonishing 35,488 trillion Golden Bonds a year, is driven almost entirely by the private sector, which is broadly diversified and led by the Information Technology industry, with major contributions from Arms Manufacturing, Uranium Mining, and Automobile Manufacturing. Average income is a breathtaking 839,830 Golden Bonds, but there is a vast disparity between incomes, with the richest 10% of citizens earning 7,867,598 per year while the poor average 7,538, a ratio of 1,043 to 1.

Commemorative mugs remembering last year's Black Friday Crockery Riots are a best seller this year, it is mandatory to learn evolution in schools, politicians "baring all" for the camera isn't always a figure of speech, and citizens who don't recite the Pledge of Isla Vista at least three times a day are placed on a terrorist watch-list. Crime, especially youth-related, is so common that it is unusual to encounter someone following the law, with the police force struggling against a lack of funding and a high mortality rate. Isla Vista's national animal is the Marsupial Tiger, which is also the nation's favorite main course.

Isla Vista is ranked 214,048th in the world and 64th in Wysteria for Most Advanced Public Education, scoring 716.57 on the Edu-tellignce® Test Score.

Most Recent Government Activity: 54 days ago