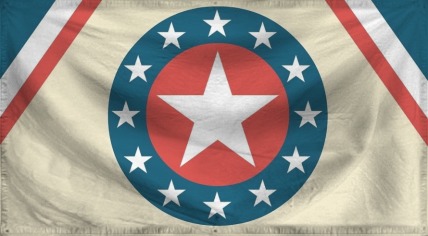 The National Republic of Thermodolia is a gargantuan, efficient nation, ruled by President Jacob Zarman with a fair hand, and remarkable for its frequent executions, keen interest in outer space, and complete lack of prisons. The hard-nosed, democratic, humorless population of 16.494 billion Thermodolians hold their civil and political rights very dear, although the wealthy and those in business tend to be viewed with suspicion.

The medium-sized, corrupt, liberal, outspoken government juggles the competing demands of Education, Defense, and Law & Order. It meets to discuss matters of state in the capital city of Thermodolia City. The average income tax rate is 85.0%, and even higher for the wealthy.

The frighteningly efficient Thermodolian economy, worth a remarkable 3,277 trillion Thermas a year, is led by the Information Technology industry, with major contributions from Tourism, Arms Manufacturing, and Retail. State-owned companies are common. Average income is an impressive 198,703 Thermas, and distributed extremely evenly, with little difference between the richest and poorest citizens.

Manufacturers of biodegradable plastics have to wait for months to show evidence of organic decomposition, things are looking up for patients accidentally prescribed erectile dysfunction medication, students do more community service than homework, and retail stores are known for creating their own oddly-similar holidays in the months preceding any major festivity. Crime is totally unknown, thanks to a well-funded police force and progressive social policies in education and welfare. Thermodolia's national animal is the Thermodolian Black Bear, which frolics freely in the nation's many lush forests, and its national religion is Thermodolian Christianity.

Thermodolia is ranked 31,900th in the world and 7th in Zentari for Rudest Citizens, with 86.68 Insults Per Minute.