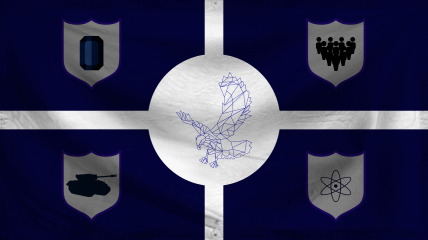 The United Provinces of Priimydia is a colossal, socially progressive nation, ruled by Brunuscus Brussius with an even hand, and renowned for its barren, inhospitable landscape, prohibition of alcohol, and suspicion of poets. The hard-nosed, hard-working, humorless population of 7.94 billion Priimydians are either ruled by a sleek, efficient government or a conglomerate of multinational corporations; it's difficult to tell which.

The relatively small, corrupt, pro-business government juggles the competing demands of Defense, Industry, and Education. It meets to discuss matters of state in the capital city of Priimydia. Citizens pay a flat income tax of 20.7%.

The frighteningly efficient Priimydian economy, worth a remarkable 1,483 trillion Priimydian Emeraldis a year, is broadly diversified and led by the Information Technology industry, with major contributions from Arms Manufacturing, Retail, and Book Publishing. Black market activity is rampant. Average income is an impressive 186,862 Priimydian Emeraldis, but there is a large disparity between incomes, with the richest 10% of citizens earning 732,484 per year while the poor average 32,434, a ratio of 22.6 to 1.

Trust-fund babies line up for places in community college, it's said that any enemy of democracy is a friend to Brunuscus Brussius, Brunuscus Brussius's Dreadnought-class tankbuster limousine is said to have more ammunition than the entire Brancalandian Army, and running away is an essential part of the elite forces' hand-to-hand training. Crime is pervasive, probably because of the absence of a police force. Priimydia's national animal is the Haast's Eagle, which is also the nation's favorite main course, and its national religion is Priimydian Catholicism.

Priimydia is ranked 262,329th in the world and 2nd in Tryzalore for Most Beautiful Environments, with 6.78 pounds of wildlife per square mile.