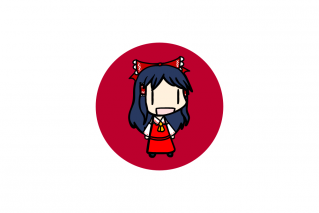 The Federal Republic of Hakurei is a gargantuan, orderly nation, ruled by Reimu Hakurei with an iron fist, and remarkable for its keen interest in outer space, national health service, and compulsory military service. The hard-nosed, cynical, devout population of 16.753 billion Hakureians are ruled by a mostly-benevolent dictator, who grants the populace the freedom to live their own lives but watches carefully for anyone to slip up.

The large, corrupt, well-organized government juggles the competing demands of Defense, Education, and Law & Order. It meets to discuss matters of state in the capital city of Hakurei Shrine. The average income tax rate is 96.2%.

The frighteningly efficient Hakureian economy, worth a remarkable 3,195 trillion Yen a year, is quite specialized and led by the Information Technology industry, with major contributions from Tourism, Arms Manufacturing, and Automobile Manufacturing. State-owned companies are reasonably common. Average income is an impressive 190,733 Yen, and evenly distributed, with the richest citizens earning only 3.4 times as much as the poorest.

Libraries are now installed with jacuzzis and mini-bars, signs at the border tell international drivers where they can put their cars, political activists are routinely executed, and the dish 'poisson avec poison' is only available on the black market. Crime, especially youth-related, is totally unknown, thanks to a very well-funded police force and progressive social policies in education and welfare. Hakurei's national animal is the Dragon, which is also the nation's favorite main course, and its national religion is Shinto.

Hakurei is ranked 127,018th in the world and 12th in Gensokyo for Most Income Equality, scoring 29.29 on the Marx-Engels Emancipation Scale.