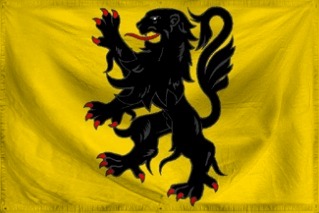 The Glorious Kingdom of Flanderlion is a gargantuan, efficient nation, ruled by Dale Flanderlion with an iron fist, and notable for its lack of airports, keen interest in outer space, and ritual sacrifices. The hard-nosed, hard-working, cynical, humorless, devout population of 14.603 billion Flanderlionians are kept under strict control by the oppressive government, which measures its success by the nation's GDP and refers to individual citizens as "human resources."

The medium-sized, corrupt, moralistic, well-organized government is primarily concerned with Defense, although Law & Order, Administration, and Industry are also considered important, while Social Policy and Welfare are ignored. It meets to discuss matters of state in the capital city of Flanderlion Fortress. The average income tax rate is 99.7%.

The frighteningly efficient Flanderlionian economy, worth an astonishing 10,562 trillion denarii a year, is driven entirely by a combination of government and state-owned industry, with private enterprise illegal. However, for those in the know, there is an enormous, deeply entrenched, broadly diversified black market in Arms Manufacturing, Information Technology, Uranium Mining, and Woodchip Exports. The private sector mostly consists of enterprising ten-year-olds selling lemonade on the sidewalk, but the government is looking at stamping this out. Average income is a breathtaking 723,298 denarii, but there is a large disparity between incomes, with the richest 10% of citizens earning 2,818,758 per year while the poor average 126,747, a ratio of 22.2 to 1.

Young children are regularly seen wagering pocket money at blackjack tables, sushi is sold on the black market, mining is the nation's most dangerous occupation, and soldiers' positions are given away by the glint of their bayonets. Crime, especially youth-related, is totally unknown, thanks to a capable police force and progressive social policies in education and welfare. Flanderlion's national animal is the Flanderlion, which teeters on the brink of extinction due to widespread deforestation, and its national religion is Dale Flanderlionianism.

Flanderlion is ranked 184th in the world and 9th in the Pacific for Largest Basket Weaving Sector, scoring 17,854.49 on the Hickory Productivity Index.

Most Recent Government Activity: 50 minutes ago