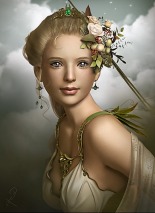 The Mystery Cult of Demeter is a gargantuan, efficient nation, ruled by Demeter with an even hand, and renowned for its public floggings, anti-smoking policies, and restrictive gun laws. The compassionate, cheerful population of 22.938 billion Demeteriuses are prohibited from doing almost everything except voting, which they do timidly and conservatively.

The enormous, corrupt, socially-minded government juggles the competing demands of Education, Environment, and Healthcare. It meets to discuss matters of state in the capital city of Mount Olympus. The income tax rate is 100%.

The frighteningly efficient Demeter economy, worth a remarkable 7,521 trillion grains a year, is driven entirely by a combination of government and state-owned industry, with private enterprise illegal. The industrial sector, which is highly specialized, is led by the Tourism industry, with major contributions from Book Publishing and Information Technology. Average income is an amazing 327,918 grains, and distributed extremely evenly, with practically no difference between the richest and poorest citizens.

Prime real estate is devoted to wind farms and solar energy generators, the Mount Olympus XV Regiment (aka "The Goat Starers") have yet to win a battle, young and brooding teens are welcomed with open arms to the Dogwarts School of Strangeness and Sorcery, and citizens are encouraged to report friends, family members or co-workers who seem depressed to the government for "counselling". Crime is totally unknown, thanks to a capable police force and progressive social policies in education and welfare. Demeter's national animal is the horse, which frolics freely in the nation's many lush forests, and its national religion is The Eleusian Mysteries.

Demeter is ranked 2,280th in the world and 1st in Greek Islands for Most Subsidized Industry, scoring 13,245.97 on the Gilded Widget Scale.