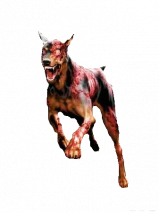 The T-Virus infection of Zombie Dog is a massive, orderly nation, ruled by Redfield with an iron fist, and notable for its barren, inhospitable landscape, otherworldly petting zoo, and fear of technology. The hard-nosed, cynical, humorless, devout population of 1.589 billion Zombie Dogians are ruled by a mostly-benevolent dictator, who grants the populace the freedom to live their own lives but watches carefully for anyone to slip up.

The enormous, corrupt, well-organized government juggles the competing demands of Administration, Law & Order, and Industry. It meets to discuss matters of state in the capital city of Racoon City. The average income tax rate is 72.6%, and even higher for the wealthy.

The frighteningly efficient Zombie Dogian economy, worth 163 trillion brains a year, is driven entirely by a combination of government and state-owned industry, with private enterprise illegal. However, for those in the know, there is an enormous, deeply entrenched black market in Uranium Mining, Woodchip Exports, Basket Weaving, and Information Technology. The private sector mostly consists of enterprising ten-year-olds selling lemonade on the sidewalk, but the government is looking at stamping this out. Average income is an impressive 103,034 brains, and evenly distributed, with the richest citizens earning only 2.5 times as much as the poorest.

Recognised healthcare professionals treat diabetes with a grain of sugar in a barrel of water, snooze factory is now prison lingo for rehabilitation center, modern Zombie Dogian art is so hot right now, and white strait-jackets are the new orange jumpsuits. Crime is totally unknown, thanks to the all-pervasive police force and progressive social policies in education and welfare. Zombie Dog's national animal is the dog, which is also the nation's favorite main course, and its national religion is Aaaahhhh.

Zombie Dog is ranked 250,290th in the world and 70th in The Bar on the corner of every region for Smartest Citizens, with 0.93 quips per hour.