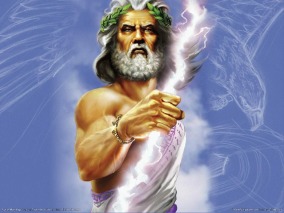 The King of Gods of Zeus- is a gargantuan, efficient nation, ruled by Zeus with an iron fist, and renowned for its compulsory military service, public floggings, and complete absence of social welfare. The hard-nosed, hard-working, cynical population of 17.952 billion Zeus-ians are ruled by a mostly-benevolent dictator, who grants the populace the freedom to live their own lives but watches carefully for anyone to slip up.

The minute, well-organized government, or what there is of one, prioritizes Defense, with Law & Order also on the agenda, while Welfare and Public Transport are ignored. The average income tax rate is 7.3%, but much higher for the wealthy.

The very strong Zeus-ian economy, worth 923 trillion Lightening Bolts a year, is driven almost entirely by the private sector, which is fairly diversified and led by the Tourism industry, with major contributions from Arms Manufacturing, Trout Farming, and Gambling. Average income is 51,457 Lightening Bolts, and evenly distributed, with the richest citizens earning only 2.9 times as much as the poorest.

People reciting Shakespeare have become a common sight, all streets are privately owned toll roads, it is a common belief that a sport isn't sport if there are no decapitations, and the mining industry is making inroads into environmentally sensitive areas. Crime is moderate. Zeus-'s national animal is the Bull, which frolics freely in the nation's many lush forests, and its national religion is a major religion.

Zeus- is ranked 242,086th in the world and 5th in Mount Olympus for Largest Welfare Programs, scoring -12.25 on the Safety Net Mesh Density Rating.