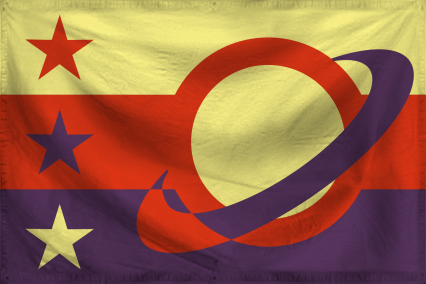 The Empirical Empire of Venusi is a colossal, environmentally stunning nation, notable for its free-roaming dinosaurs, compulsory vegetarianism, and irreverence towards religion. The compassionate population of 9.594 billion Venusians have some civil rights, but not too many, enjoy the freedom to spend their money however they like, to a point, and take part in free and open elections, although not too often.

The large government prioritizes Education, although Administration, Healthcare, and Environment are also considered important, while Spirituality and Defense receive no funds. It meets to discuss matters of state in the capital city of Fresco Nova. The average income tax rate is 75.7%, and even higher for the wealthy.

The powerhouse Venusian economy, worth a remarkable 1,011 trillion piezoes a year, is driven entirely by a combination of government and state-owned industry, with private enterprise illegal. The industrial sector, which is quite specialized, is mostly made up of the Information Technology industry, with significant contributions from Tourism, Basket Weaving, and Book Publishing. Average income is an impressive 105,408 piezoes, and distributed extremely evenly, with little difference between the richest and poorest citizens.

3D printed organs are a breath of new life for the sick and elderly, government officials who do an offal job get smoked, goldfish bowls are three metres in diameter, and digital novelty coins make for surprising vanguards of the revolution. Crime is totally unknown. Venusi's national animal is the Dolphin, which frolics freely in the nation's sparkling oceans.

Venusi is ranked 42,032nd in the world and 9th in Realm of Unrestricted Science for Most Efficient Economies, scoring 96 on the Krugman-Greenspan Business Outlook Index.