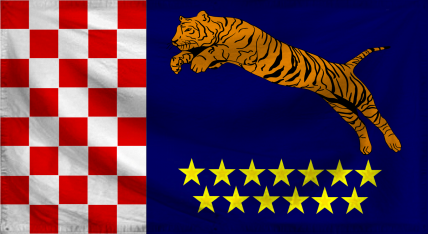 The Confederacy of Singhapala Bisaya is a massive, cultured nation, ruled by Lumay Temuldav with an even hand, and notable for its keen interest in outer space, smutty television, and ubiquitous missile silos. The hard-nosed, hard-working population of 4.685 billion Bisayans are either ruled by a sleek, efficient government or a conglomerate of multinational corporations; it's difficult to tell which.

The medium-sized, corrupt, pro-business government juggles the competing demands of Industry, Administration, and Education. It meets to discuss matters of state in the capital city of Fort Sotto. Citizens pay a flat income tax of 69.1%.

The frighteningly efficient Singhapala Bisayan economy, worth a remarkable 1,329 trillion Ringgits a year, is broadly diversified and led by the Information Technology industry, with major contributions from Arms Manufacturing, Retail, and Book Publishing. Black market activity is rampant. Average income is an amazing 283,877 Ringgits, but there is a significant disparity between incomes, with the richest 10% of citizens earning 894,413 per year while the poor average 68,890, a ratio of 13.0 to 1.

Bisayans incessantly needle their doctors for relief, a little pushing and pulling is needed for big ships to pass, cosy TV sitcom "AI Love Lucy" showcases harmonious human-robot cohabitation, and exploding toys that leak battery acid are back in the shops after the government declared child safety 'over-rated'. Crime, especially youth-related, is totally unknown. Singhapala Bisaya's national animal is the Great Philippine Tiger, which teeters on the brink of extinction due to widespread deforestation.

Singhapala Bisaya is ranked 7,537th in the world and 12th in Lands End for Smartest Citizens, with 105.91 quips per hour.