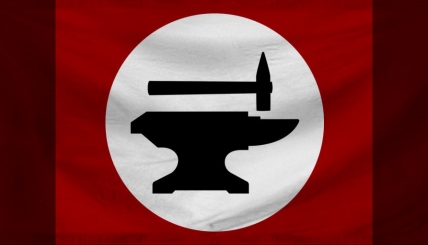 The Sovereign Corporation of
PQ Forge
Iron Fist Consumerists
If you can dream it, we can build it!
Influence
Apprentice
Region
NationStates
Civil Rights
Outlawed
Economy
Frightening
Political Freedom
Outlawed

The Sovereign Corporation of PQ Forge is a gargantuan, orderly nation, ruled by Seven with an iron fist, and renowned for its sprawling nuclear power plants, prohibition of alcohol, and free-roaming dinosaurs. The hard-nosed, cynical, humorless population of 27.954 billion corporate employees are kept under strict control by the oppressive government, which measures its success by the nation's GDP and refers to individual citizens as "human resources."

The tiny, corrupt, moralistic, well-organized government is dominated by the Department of Defense, although Law & Order is also considered important, while Welfare and Environment receive no funds. It meets to discuss matters of state in the capital city of Chapterhouse Prime. Income tax is unheard of.

The frighteningly efficient Corporate Employee economy, worth an astonishing 13,866 trillion GPS a year, is driven entirely by a combination of government and state-owned industry, with private enterprise illegal. However, for those in the know, there is a large, well-organized, broadly diversified black market in Arms Manufacturing, Information Technology, Uranium Mining, and Woodchip Exports. The private sector mostly consists of enterprising ten-year-olds selling lemonade on the sidewalk, but the government is looking at stamping this out. Average income is an amazing 496,060 GPS, and evenly distributed, with the richest citizens earning only 2.0 times as much as the poorest.

Massive new slaughterhouses are being hailed as a sign of progress, nudity is frowned upon, the police are tightening their grip on alcohol smugglers, and public urination is on the increase. Crime, especially youth-related, is totally unknown, despite the fact that it is difficult to make it through a day without breaking one of the country's many laws. PQ Forge's national animal is the slave labourer, which is also the nation's favorite main course, and its national religion is Prolefeed.

PQ Forge is ranked 353rd in the world and 3rd in NationStates for Largest Pizza Delivery Sector, scoring 16,024.02 on the Pepperoni Propulsion Productivity Index.

Most Recent Government Activity: 65 minutes ago