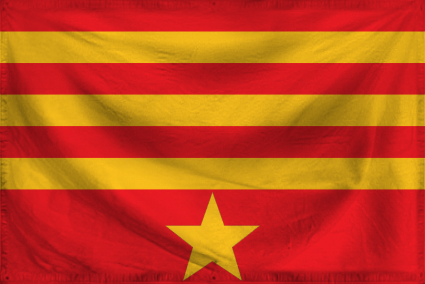 The Commonality of Narn is a gargantuan, efficient nation, ruled by Premier Anton Hoskanner with an even hand, and renowned for its keen interest in outer space, parental licensing program, and multi-spousal wedding ceremonies. The democratic population of 20.334 billion Narns have some civil rights, but not too many, enjoy the freedom to spend their money however they like, to a point, and take part in free and open elections, although not too often.

The medium-sized government juggles the competing demands of Defense, Education, and Environment. It meets to discuss matters of state in the capital city of Valkeakoski. The average income tax rate is 51.0%.

The very strong Narnish economy, worth a remarkable 1,764 trillion yengs a year, is driven entirely by a combination of government and state-owned industry, with private enterprise illegal. The industrial sector, which is broadly diversified, is led by the Tourism industry, with major contributions from Retail, Arms Manufacturing, and Information Technology. Average income is 86,784 yengs, with the richest citizens earning 5.0 times as much as the poorest.

All government communication requires the imprimatur of the Truth Police, the endangered saltwater humpback dragon is only seen in captivity programs, cricket farmers use magnifying glasses to fit every member of their herd with tiny tracking tags, and voters must frequently select what they view as the lesser of two evils on the ballot. Crime, especially youth-related, is totally unknown, thanks to a capable police force and progressive social policies in education and welfare. Narn's national animal is the dragon, which soars majestically through the nation's famously clear skies, and its national religion is Korvinism.

Narn is ranked 212,591st in the world and 9th in The Democratic Commonwealth for Lowest Overall Tax Burden, scoring 13.4 on the Hayek Index.