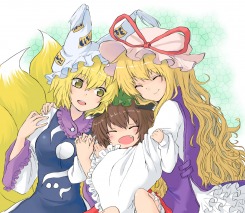 The Community of Lost Village Mayohiga is a gargantuan, efficient nation, ruled by Yukari Yakumo with an iron fist, and remarkable for its rampant corporate plagiarism, pith helmet sales, and ubiquitous missile silos. The hard-nosed, cynical, devout population of 11.439 billion stray cats are ruled by a mostly-benevolent dictator, who grants the populace the freedom to live their own lives but watches carefully for anyone to slip up.

The enormous, corrupt, well-organized government juggles the competing demands of Environment, Education, and Administration. It meets to discuss matters of state in the capital city of Yakumo Residence. The average income tax rate is 79.9%, and even higher for the wealthy.

The frighteningly efficient Mayohigan economy, worth a remarkable 1,374 trillion Yen a year, is quite specialized and mostly made up of the Tourism industry, with significant contributions from Arms Manufacturing and Book Publishing. Black market activity is rampant. State-owned companies are reasonably common. Average income is an impressive 120,155 Yen, and distributed extremely evenly, with little difference between the richest and poorest citizens.

Police reduce their paperwork by refusing to arrest anyone, those who cut young children are told to cut it out, unprotected royals have replaced their corgis with rottweilers, and few that venture into government archives are ever seen again. Crime, especially youth-related, is totally unknown, thanks to a well-funded police force and progressive social policies in education and welfare. Lost Village Mayohiga's national animal is the Chen, which frolics freely in the nation's many lush forests, and its national religion is Shinto.

Lost Village Mayohiga is ranked 243,524th in the world and 8th in Ammitica for Largest Welfare Programs, scoring -7.75 on the Safety Net Mesh Density Rating.