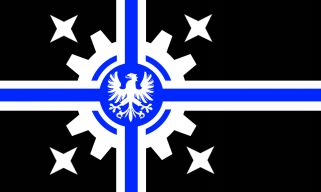 The Imperial Union of Ermonte is a gargantuan, socially progressive nation, ruled by Aaron Callaghan with a fair hand, and remarkable for its public floggings, sprawling nuclear power plants, and keen interest in outer space. The hard-nosed, hard-working, democratic, cheerful population of 26.283 billion Ermontians enjoy a sensible mix of personal and economic freedoms, while the political process is open and the people's right to vote held sacrosanct.

The large, corrupt government juggles the competing demands of Education, Industry, and Healthcare. It meets to discuss matters of state in the capital city of Kahlenberg. Citizens pay a flat income tax of 73.1%.

The frighteningly efficient Ermontian economy, worth a remarkable 3,490 trillion Eires a year, is fairly diversified and led by the Tourism industry, with major contributions from Information Technology, Arms Manufacturing, and Book Publishing. Average income is an impressive 132,814 Eires, with the richest citizens earning 7.8 times as much as the poorest.

A weakened police force struggles to maintain law and order, anti-government political posters adorn every building like wallpaper, military funding has been stripped back, and all weapon research has been banned. Crime, especially youth-related, is totally unknown, thanks to a well-funded police force and progressive social policies in education and welfare. Ermonte's national animal is the Celtic Tiger, which is also the nation's favorite main course, and its national religion is Catholicism.

Ermonte is ranked 224,024th in the world and 1st in Valkyria for Fattest Citizens, with 8.79 Obesity Rate.