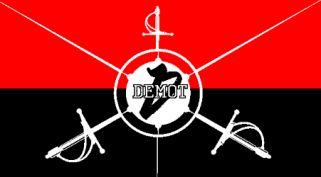 The Calm Realm of Demot is a gargantuan, safe nation, notable for its national health service, daily referendums, and keen interest in outer space. The hard-nosed, democratic population of 35.347 billion Demotians enjoy a sensible mix of personal and economic freedoms, while the political process is open and the people's right to vote held sacrosanct.

The medium-sized government juggles the competing demands of Law & Order, Education, and Defense. The average income tax rate is 36.7%, but much higher for the wealthy.

The strong Demotian economy, worth a remarkable 1,884 trillion dollars a year, is fairly diversified and led by the Information Technology industry, with major contributions from Automobile Manufacturing, Soda Sales, and Book Publishing. State-owned companies are reasonably common. Average income is 53,324 dollars, and evenly distributed, with the richest citizens earning only 2.5 times as much as the poorest.

Rupert Bear is considered to be the most risqué TV programme in Demot, the government seizes all major gold finds, radio shows frequently feature people denouncing religion, and foreigners are treated with great suspicion. Crime is totally unknown, thanks to a well-funded police force and progressive social policies in education and welfare. Demot's national animal is the black dragon, which teeters on the brink of extinction due to toxic air pollution.

Demot is ranked 243,543rd in the world and 187th in Atlantian Oceania for Highest Drug Use, scoring 11.4 on the Pineapple Fondness Rating.