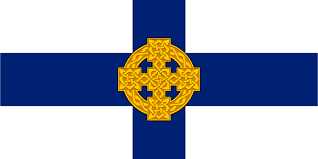 The Theocracy of Culdi is a gargantuan, cultured nation, notable for its free-roaming dinosaurs, zero percent divorce rate, and keen interest in outer space. The hard-nosed, hard-working, devout population of 12.044 billion Culdians are either ruled by a sleek, efficient government or a conglomerate of multinational corporations; it's difficult to tell which.

The frighteningly efficient Culdian economy, worth a remarkable 2,110 trillion crowns a year, is broadly diversified and led by the Tourism industry, with major contributions from Information Technology, Retail, and Book Publishing. Average income is an impressive 175,212 crowns, but there is a large disparity between incomes, with the richest 10% of citizens earning 697,720 per year while the poor average 29,637, a ratio of 23.5 to 1.

The nation's atlases tend to go out of date every few weeks, tough diplomacy is often best handled with a nutcracker, the Treasury has been accused of flushing money down the toilet, and the only things written in the stars are arrest warrants for astrologers. Crime, especially youth-related, is totally unknown. Culdi's national animal is the lion, which is also the nation's favorite main course.

Culdi is ranked 4,442nd in the world and 3rd in Albion for Largest Retail Industry, scoring 19,175.07 on the Shrinkwrap Consignment Productivity Index.