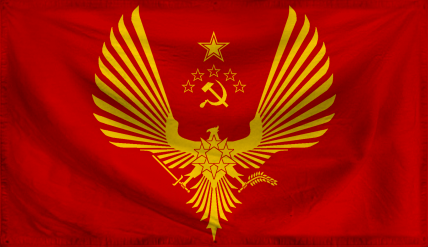 The People's Republic of Cloud Commune is a massive, efficient nation, ruled by Emperor Lucitos with an even hand, and remarkable for its museums and concert halls, ban on automobiles, and free-roaming dinosaurs. The compassionate population of 2.059 billion Communes are prohibited from doing almost everything except voting, which they do timidly and conservatively.

The enormous, socially-minded government juggles the competing demands of Education, Administration, and Healthcare. It meets to discuss matters of state in the capital city of Novus Constantinople. The average income tax rate is 92.7%, and even higher for the wealthy.

The all-consuming Communian economy, worth 234 trillion Golden Tears a year, is driven entirely by a combination of government and state-owned industry, with private enterprise illegal. The industrial sector, which is quite specialized, is led by the Information Technology industry, with significant contributions from Beef-Based Agriculture, Basket Weaving, and Tourism. Average income is an impressive 114,116 Golden Tears, and distributed extremely evenly, with practically no difference between the richest and poorest citizens.

Citizens re-mortgage their homes to buy lottery tickets, war vets look after war animals, ice-filled coffins are ominously positioned in the corner of every hospital ward, and all writing must pass a censorship board before being allowed on the shelves. Crime, especially youth-related, is totally unknown, thanks to a very well-funded police force and progressive social policies in education and welfare. Cloud Commune's national animal is the Kangeroo, which frolics freely in the nation's many lush forests, and its national religion is Atheism.

Cloud Commune is ranked 96,465th in the world and 30th in Hell for Highest Wealthy Incomes, with 126,537 Standard Monetary Units.