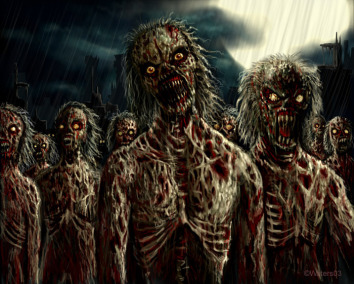 The Rogue Nation of Zombie 59 is a massive, efficient nation, ruled by Phillix Daviz with an iron fist, and renowned for its ritual sacrifices, unlimited-speed roads, and avowedly heterosexual populace. The hard-nosed, hard-working, cynical, humorless, devout population of 2.788 billion Zombie 59ians are ruled by a mostly-benevolent dictator, who grants the populace the freedom to live their own lives but watches carefully for anyone to slip up.

The large, corrupt, well-organized government juggles the competing demands of Industry, Defense, and Administration. It meets to discuss matters of state in the capital city of Nassaux. The average income tax rate is 55.9%.

The frighteningly efficient Zombie 59ian economy, worth 375 trillion deniers a year, is quite specialized and mostly comprised of black market activity, especially in Arms Manufacturing, Uranium Mining, Woodchip Exports, and Automobile Manufacturing. State-owned companies are reasonably common. Average income is an impressive 134,753 deniers, and evenly distributed, with the richest citizens earning only 3.9 times as much as the poorest.

Cheese lovers have a case of the bleus, the nation's new currency features full-length portraits of Phillix Daviz in ermine and velvet garb, cheap textbooks have replaced coasters at college ragers, and abortions are routinely performed in the nation's hospitals. Crime, especially youth-related, is totally unknown, thanks to a capable police force and progressive social policies in education and welfare. Zombie 59's national animal is the cow, which teeters on the brink of extinction due to widespread deforestation, and its national religion is Brains.

Zombie 59 is ranked 91,836th in the world and 294th in NationStates for Largest Cheese Export Sector, scoring 2,552.39 on the Mozzarella Productivity Index.