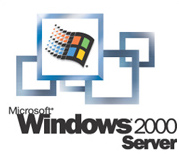 The Republic of Windows Server 2000 is a colossal, efficient nation, renowned for its barren, inhospitable landscape, irreverence towards religion, and spontaneously combusting cars. The hard-nosed, hard-working, cynical population of 9.442 billion Windows Server 2000ians are ruled with an iron fist by the corrupt, dictatorship government, which oppresses anyone who isn't on the board of a Fortune 500 company. Large corporations tend to be above the law, and use their financial clout to gain ever-increasing government benefits at the expense of the poor and unemployed.

The medium-sized, moralistic, pro-business, well-organized government prioritizes Law & Order, with Defense, Administration, and Healthcare also on the agenda, while Spirituality and International Aid receive no funds. Citizens pay a flat income tax of 22.6%.

The very strong Windows Server 2000ian economy, worth 550 trillion security tokens a year, is led by the Arms Manufacturing industry, with major contributions from Woodchip Exports, Uranium Mining, and Information Technology. Average income is 58,268 security tokens, but there is a significant disparity between incomes, with the richest 10% of citizens earning 198,163 per year while the poor average 12,631, a ratio of 15.7 to 1.

Illegal moonshine operations get taken out with laser-guided airstrikes, mining is the nation's most dangerous occupation, all government facilities are built in the subterranean citadel of Windows Server 2000 City, and parents are held criminally responsible for their children's crimes. Crime, especially youth-related, is totally unknown, thanks to a very well-funded police force. Windows Server 2000's national animal is the blue screen, which teeters on the brink of extinction due to widespread deforestation.

Windows Server 2000 is ranked 33,915th in the world and 2nd in The Trunk of a Pontiac Tempest for Greatest Rich-Poor Divides, with 15.69 Rich To Poor Income Ratio.