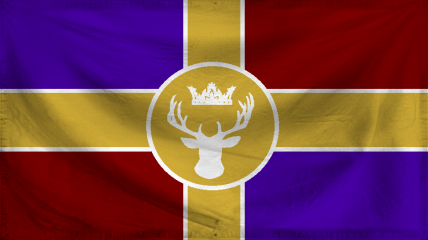 The Dominion of Vos May is a colossal, efficient nation, ruled by Exarchs Of Winds with an even hand, and renowned for its compulsory military service, frequent executions, and free-roaming dinosaurs. The hard-nosed, hard-working population of 6.589 billion Vos are either ruled by a sleek, efficient government or a conglomerate of multinational corporations; it's difficult to tell which.

The tiny, pro-business government is primarily concerned with Defense, with Administration and Industry also on the agenda, while International Aid and Spirituality aren't funded at all. It meets to discuss matters of state in the capital city of Port Arbor. The average income tax rate is 7.8%.

The powerhouse Vos economy, worth 593 trillion Guilders a year, is broadly diversified and led by the Arms Manufacturing industry, with major contributions from Information Technology, Uranium Mining, and Gambling. Average income is 90,110 Guilders, and evenly distributed, with the richest citizens earning only 4.7 times as much as the poorest.

Fancy dress parties are raided by military police for new recruits, factories grind to a halt every time there is an election, private businesses are paving paradises to put up parking lots, and the nation's first space rocket -- sponsored by Eckie-Ecola and shaped like an enormous soda bottle -- is being developed. Crime is moderate, with the police force struggling against a lack of funding and a high mortality rate. Vos May's national animal is the Marol'Dara, which teeters on the brink of extinction due to widespread deforestation.

Vos May is ranked 135,099th in the world and 4th in The Grand Dominion for Largest Publishing Industry, scoring 1,019.7 on the Bella Potter Productivity e-Index.