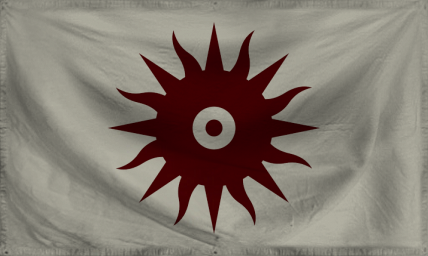 The Dominion of Vladiskhan is a massive, orderly nation, ruled by Vladis Khan with an iron fist, and notable for its ritual sacrifices, avowedly heterosexual populace, and frequent executions. The hard-nosed, cynical, humorless, devout population of 1.052 billion Vladiskhanians are ruled without fear or favor by a psychotic dictator, who outlaws just about everything and refers to the populace as "my little playthings."

The large, corrupt, moralistic, well-organized government juggles the competing demands of Law & Order, Defense, and Spirituality. It meets to discuss matters of state in the capital city of Vladia. The average income tax rate is 56.3%, and even higher for the wealthy.

The Vladiskhanian economy, worth 59.7 trillion Gold Coins a year, is driven entirely by a combination of government and state-owned industry, with private enterprise illegal. However, for those in the know, there is a large, well-organized, quite specialized black market in Arms Manufacturing, Beef-Based Agriculture, Trout Farming, and Uranium Mining. The private sector mostly consists of enterprising ten-year-olds selling lemonade on the sidewalk, but the government is looking at stamping this out. Average income is 56,738 Gold Coins, and evenly distributed, with the richest citizens earning only 2.6 times as much as the poorest.

Citizens who leave the country are officially classed as traitors, the smell of napalm in the morning is usually alongside grilled Tri-Horned Boar, RPG fans reminisce fondly about when people thought they were evil and dangerous rather than geeky and socially inept, and open-heart surgery is taught in seminaries. Crime, especially youth-related, is totally unknown, thanks to the all-pervasive police force. Vladiskhan's national animal is the Tri-Horned Boar, which is also the nation's favorite main course, and its national religion is Violentism.

Vladiskhan is ranked 69,545th in the world and 7th in Imperial Continent for Most Subsidized Industry, scoring 1,675.71 on the Gilded Widget Scale.