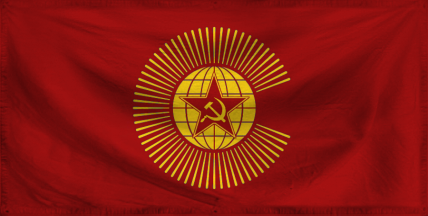 The Xinyouanlism utopia of United Of Communist is a massive, cultured nation, renowned for its otherworldly petting zoo, infamous sell-swords, and rampant corporate plagiarism. The hard-nosed population of 1.858 billion Communists have some civil rights, but not too many, enjoy the freedom to spend their money however they like, to a point, and take part in free and open elections, although not too often.

The medium-sized government juggles the competing demands of Education, Industry, and Administration. It meets to discuss matters of state in the capital city of Leninborg. The average income tax rate is 78.5%, and even higher for the wealthy.

The frighteningly efficient united of communists economy, worth 355 trillion Saint-Simons a year, is driven entirely by a combination of government and state-owned industry, with private enterprise illegal. However, for those in the know, there is a large, well-organized, fairly diversified black market in Information Technology, Book Publishing, Arms Manufacturing, and Retail. The private sector mostly consists of enterprising ten-year-olds selling lemonade on the sidewalk, but the government is looking at stamping this out. Average income is an impressive 191,380 Saint-Simons, and distributed extremely evenly, with little difference between the richest and poorest citizens.

Schools offer a range of lessons in subjects as diverse as The Economics of Bullying for Lunch Money, small children are learning a lot of new words from a teacher with Tourette Syndrome, the government's new priority is citizens' access to cat videos, and crossword puzzles have been co-opted as a symbol of racial discrimination. Crime, especially youth-related, is moderate, perhaps because of the country's complete lack of prisons. United Of Communist's national animal is the horse, which is also the nation's favorite main course.

United Of Communist is ranked 67,501st in the world and 124th in The Communist Bloc for Highest Crime Rates, with 11.04 crimes per hour.