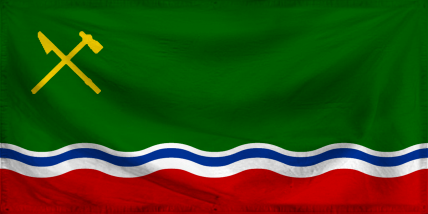 The Socialist People's Fiefdom of Uncle Noel is a gargantuan, cultured nation, ruled by General Secretary Hoogaboom with an iron fist, and remarkable for its deadly medical pandemics, compulsory military service, and otherworldly petting zoo. The compassionate, cynical, humorless, devout population of 31.192 billion Anahuacans are ruled with an iron fist by the dictatorship government, which ensures that no-one outside the party gets too rich. In their personal lives, however, citizens are relatively unoppressed; it remains to be seen whether this is because the government genuinely cares about its people, or if it hasn't gotten around to stamping out civil rights yet.

The enormous, corrupt, well-organized government juggles the competing demands of Defense, Education, and Industry. It meets to discuss matters of state in the capital city of Itztlan. The average income tax rate is 93.8%, and even higher for the wealthy.

The frighteningly efficient Uncle Noelian economy, worth a remarkable 3,478 trillion Shillings a year, is driven entirely by a combination of government and state-owned industry, with private enterprise illegal. The industrial sector, which is quite specialized, is dominated by the Arms Manufacturing industry, with significant contributions from Information Technology, Retail, and Book Publishing. Average income is an impressive 111,509 Shillings, and distributed extremely evenly, with little difference between the richest and poorest citizens.

Children seem to be getting better at lying these days, aeroplane cockpits no longer have altimeters or airspeed indicators, funeral directors are frequently looking at their watches during funerals, and government popup ads are springing up like weeds. Crime, especially youth-related, is totally unknown, thanks to a very well-funded police force and progressive social policies in education and welfare. Uncle Noel's national animal is the Armadillo, which is also the nation's favorite main course, and its national religion is Constitutional Socialism.

Uncle Noel is ranked 251,104th in the world and 34th in Western Atlantic for Largest Insurance Industry, scoring -13.53 on the Risk Expulsion Effectiveness Rating.