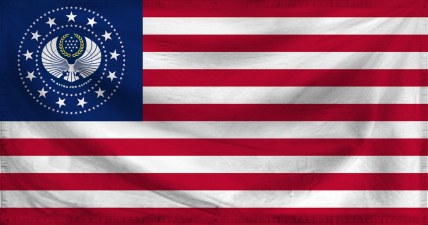 The Global Hegemony of The Unified American Federation is a gargantuan, environmentally stunning nation, ruled by President Toshinori Yagi with an even hand, and remarkable for its frequent executions, otherworldly petting zoo, and free-roaming dinosaurs. The hard-nosed population of 13.525 billion Americans have some civil rights, but not too many, enjoy the freedom to spend their money however they like, to a point, and take part in free and open elections, although not too often.

The enormous, corrupt government prioritizes Defense, with Education, Healthcare, and Environment also on the agenda, while Spirituality receives no funds. It meets to discuss matters of state in the capital city of Washington DC. The income tax rate is 100%.

The frighteningly efficient Unified American Federationian economy, worth a remarkable 3,722 trillion Dollars a year, is quite specialized and led by the Information Technology industry, with significant contributions from Arms Manufacturing and Tourism. State-owned companies are reasonably common. Average income is an amazing 275,240 Dollars, and distributed extremely evenly, with little difference between the richest and poorest citizens.

The Unified American Federation is ranked 72,216th in the world and 12th in New World Union for Highest Drug Use, scoring 84.8 on the Pineapple Fondness Rating.