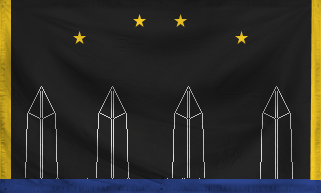 The Interstellar Republic of The Oblong Collective is a colossal, efficient nation, ruled by Premier Fup Fritzkizen with a fair hand, and renowned for its ubiquitous missile silos, free-roaming dinosaurs, and punitive income tax rates. The compassionate, democratic population of 9.66 billion Oblongis hold their civil and political rights very dear, although the wealthy and those in business tend to be viewed with suspicion.

The medium-sized, liberal government juggles the competing demands of Administration, Education, and Defense. It meets to discuss matters of state in the capital city of Plonk-Ploon. The average income tax rate is 95.7%.

The frighteningly efficient Oblong economy, worth a remarkable 2,271 trillion Oblong Credits a year, is driven entirely by a combination of government and state-owned industry, with private enterprise illegal. The industrial sector, which is broadly diversified, is led by the Information Technology industry, with significant contributions from Arms Manufacturing, Tourism, and Book Publishing. Average income is an amazing 235,172 Oblong Credits, and distributed extremely evenly, with little difference between the richest and poorest citizens.

Schools have extensive counseling programs for troubled students, trespassers entering Premier Fup Fritzkizen's office are immediately vaporized, practising saying 'how now brown cow' is an essential part of holiday planning, and waste is frequently shipped to other countries. Crime is totally unknown. The Oblong Collective's national animal is the Space Manatee, which frolics freely in the nation's sparkling oceans, and its national religion is The Church of Monty Python.

The Oblong Collective is ranked 15,582nd in the world and 1st in Weyard for Most Beautiful Environments, with 1,182.22 pounds of wildlife per square mile.