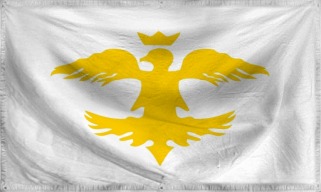 The Great Khanate of The Hunnic Empire- is a gargantuan, orderly nation, ruled by Attila with an iron fist, and notable for its multi-spousal wedding ceremonies, suspicion of poets, and complete absence of social welfare. The hard-nosed, hard-working, cynical, humorless, devout population of 13.409 billion Huns are kept under strict control by the oppressive government, which measures its success by the nation's GDP and refers to individual citizens as "human resources."

The medium-sized, corrupt, well-organized government is primarily concerned with Defense, with Law & Order, Industry, and Administration also on the agenda, while Social Policy and Welfare receive no funds. It meets to discuss matters of state in the capital city of Attila's Court. The average income tax rate is 99.3%.

The frighteningly efficient Hunnic economy, worth a remarkable 7,410 trillion Horses a year, is broadly diversified and mostly comprised of black market activity, especially in Arms Manufacturing, Retail, Information Technology, and Uranium Mining. Average income is a breathtaking 552,679 Horses, but there is a large disparity between incomes, with the richest 10% of citizens earning 2,718,697 per year while the poor average 64,158, a ratio of 42.4 to 1.

Handling people's data is proving an immersive experience, the government is well known for declaring war on other countries for suspected slights, in life full of care there is no time to stop and stare, and it is considered unpatriotic to learn a foreign language. Crime, especially youth-related, is totally unknown, thanks to a very well-funded police force and progressive social policies in education and welfare. The Hunnic Empire-'s national animal is the Gyrfalcon, which is also the nation's favorite main course, and its national religion is Tengriism.

The Hunnic Empire- is ranked 30,299th in the world and 654th in the Rejected Realms for Healthiest Citizens, with 8.06 bananas ingested per day.