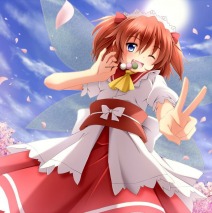 The Fabulous Faeries of Sunny Milk is a gargantuan, pleasant nation, ruled by Glorious Leader Sunny Milk with an even hand, and renowned for its ubiquitous missile silos. The hard-nosed, hard-working population of 11.547 billion faeries have some civil rights, but not too many, enjoy the freedom to spend their money however they like, to a point, and take part in free and open elections, although not too often.

The relatively small government juggles the competing demands of Defense, Law & Order, and Healthcare. It meets to discuss matters of state in the capital city of Gensokyo. The average income tax rate is 17.9%.

The faerie economy, worth 563 trillion Deneroes a year, is led by the Information Technology industry, with major contributions from Gambling, Book Publishing, and Trout Farming. Average income is 48,780 Deneroes, and evenly distributed, with the richest citizens earning only 3.6 times as much as the poorest.

Builders across Sunny Milk are blocked up with orders for new public loos, consumption of cat memes has skyrocketed, some electoral districts are without a representative as they are stuck with perpetual revotes, and Glorious Leader Sunny Milk has been known to threaten dissenting citizens with a machine gun at press conferences. Crime, especially youth-related, is moderate. Sunny Milk's national animal is the Giraffe.

Sunny Milk is ranked 214,001st in the world and 82nd in The Bar on the corner of every region for Most Advanced Public Education, scoring 712.07 on the Edu-tellignce® Test Score.