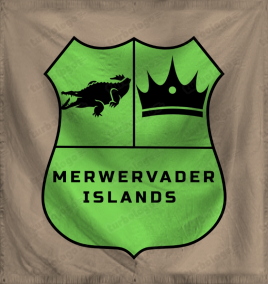 The Communist Kingdom of South Merwervader Islands is a massive, genial nation, ruled by Lord Sanfred Merwervader with an even hand, and renowned for its museums and concert halls, zero percent divorce rate, and devotion to social welfare. The compassionate, devout population of 1.724 billion South Merwervader Islandsians have some civil rights, but not too many, enjoy the freedom to spend their money however they like, to a point, and take part in free and open elections, although not too often.

The large government juggles the competing demands of Education, Administration, and Healthcare. It meets to discuss matters of state in the capital city of Crocodile city. The average income tax rate is 73.0%, and even higher for the wealthy.

The frighteningly efficient South Merwervader Islandsian economy, worth 184 trillion rupees a year, is driven entirely by a combination of government and state-owned industry, with private enterprise illegal. The industrial sector, which is fairly diversified, is led by the Book Publishing industry, with major contributions from Information Technology, Tourism, and Trout Farming. Average income is an impressive 106,834 rupees, and distributed extremely evenly, with little difference between the richest and poorest citizens.

Access to the woods is only granted to those who bring a small shrubbery, in court almost every witness is a hostile witness, atheists on vacation find The Great Crocodile's scriptures make useful doorstops, and heartfelt sentiments are mercilessly marketed by a million-rupee treacle machine. Crime is totally unknown, thanks to a capable police force and progressive social policies in education and welfare. South Merwervader Islands's national animal is the Crocodile, which frolics freely in the nation's sparkling oceans, and its national religion is The Great Crocodile.

The Transmanian Islands, and 14 others.

The Communist regime of Sovietchina,