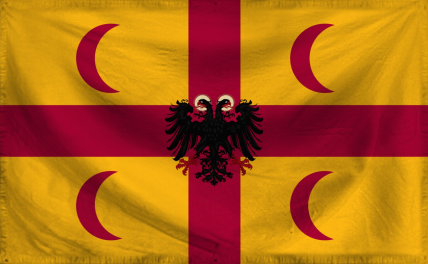 The Republic of Scutarie is a huge, cultured nation, notable for its museums and concert halls, zero percent divorce rate, and compulsory military service. The hard-nosed, hard-working, devout population of 404 million Scutariéns have some civil rights, but not too many, enjoy the freedom to spend their money however they like, to a point, and take part in free and open elections, although not too often.

The relatively small government prioritizes Defense, with Education, Law & Order, and Industry also on the agenda, while Social Policy and International Aid are ignored. It meets to discuss matters of state in the capital city of Hrisopolis. Citizens pay a flat income tax of 18.0%.

The powerhouse Scutarién economy, worth 33.9 trillion Livre scutariens a year, is dominated by the Tourism industry, with significant contributions from Retail, Arms Manufacturing, and Trout Farming. Average income is 84,016 Livre scutariens, with the richest citizens earning 7.7 times as much as the poorest.

The jackhammer is considered a tool of artistic criticism, photographers can be found hiding behind the curtains in Leader's bedroom, education is transforming people into first-rate snobs, and citizens must pay to enjoy Scutarie's pristine beaches. Crime, especially youth-related, is totally unknown, thanks to a capable police force and progressive social policies in education and welfare. Scutarie's national animal is the Double Headed Eagle, which soars majestically through the nation's famously clear skies.

Scutarie is ranked 229,640th in the world and 991st in Europe for Most Rebellious Youth, scoring -10 on the Stark-Dean Displacement Index.

Why are we hear,

Northen Czech, and 62 others.