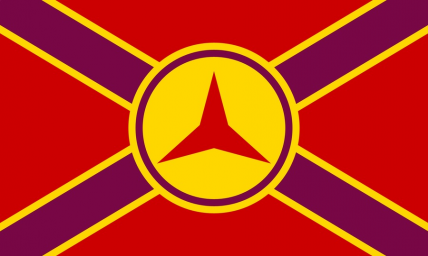 The Authoritarian Republic of Sacred Reich is a gargantuan, environmentally stunning nation, ruled by Shadow Broker with an iron fist, and notable for its rum-swilling pirates, sprawling nuclear power plants, and smutty television. The hard-nosed, cynical, humorless population of 24.771 billion Sacred Reichians are ruled by a mostly-benevolent dictator, who grants the populace the freedom to live their own lives but watches carefully for anyone to slip up.

The large, corrupt, well-organized government juggles the competing demands of Defense, Law & Order, and Education. It meets to discuss matters of state in the capital city of Arcadia. The income tax rate is 100%.

The frighteningly efficient Sacred Reichian economy, worth an astonishing 11,347 trillion Guilders a year, is driven entirely by a combination of government and state-owned industry, with private enterprise illegal. However, for those in the know, there is an enormous, deeply entrenched, quite specialized black market in Arms Manufacturing, Information Technology, Book Publishing, and Gambling. The private sector mostly consists of enterprising ten-year-olds selling lemonade on the sidewalk, but the government is looking at stamping this out. Average income is an amazing 458,084 Guilders, and distributed extremely evenly, with little difference between the richest and poorest citizens.

Skyscrapers get built in just days, the government has begun selling heroin and ecstasy to help fund its projects, hypochondriacs demand treatment for genetic disorders they don't have, and the Arcadia Film Festival recently voted 'Sacred Reichian Getting Hit By Football' as best film. Crime, especially youth-related, is totally unknown, thanks to a very well-funded police force and progressive social policies in education and welfare. Sacred Reich's national animal is the Imperial Eagle, which is also the nation's favorite main course, and its national religion is Imperial Truth.

Sacred Reich is ranked 118th in the world and 2nd in Lazarus for Most Advanced Law Enforcement, scoring 30,732.51 on the Orwell Orderliness Index.