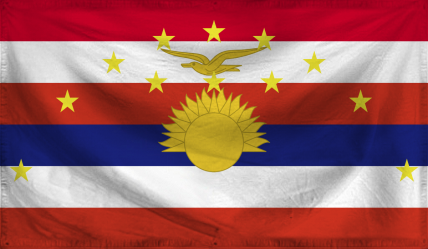 The Democratic States of Sabai Mak Mak is a huge, cultured nation, remarkable for its smutty television, soft-spoken computers, and prohibition of alcohol. The compassionate, democratic population of 300 million Sabai Citizens enjoy a sensible mix of personal and economic freedoms, while the political process is open and the people's right to vote held sacrosanct.

The medium-sized government juggles the competing demands of Administration, Education, and Industry. It meets to discuss matters of state in the capital city of Thip Nakorn. The average income tax rate is 51.7%, and even higher for the wealthy.

The powerhouse Sabai economy, worth 24.9 trillion Sabais a year, is driven entirely by a combination of government and state-owned industry, with private enterprise illegal. The industrial sector, which is quite specialized, is led by the Information Technology industry, with significant contributions from Tourism, Book Publishing, and Beef-Based Agriculture. Average income is 82,885 Sabais, and distributed extremely evenly, with little difference between the richest and poorest citizens.

The best way to be heard in politics is to speak softly and carry a big comedy prop, the nightly news reports prosaically on the government blindly throwing money at despotic kidnappers, grinding bureaucracy has the international wheels of justice turning slowly, and toilet paper is considered a non-essential item in the embargo against Brasilistan. Crime, especially youth-related, is totally unknown, thanks to a capable police force and progressive social policies in education and welfare. Sabai Mak Mak's national animal is the Sloths, which frolics freely in the nation's many lush forests.

Sabai Mak Mak is ranked 184,068th in the world and 6,032nd in the Rejected Realms for Greatest Rich-Poor Divides, with 1.84 Rich To Poor Income Ratio.