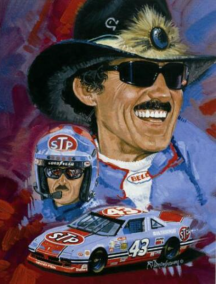 The Seven Time NASCAR Champion of Richard Petty is a gargantuan, genial nation, ruled by Lee Petty with a fair hand, and notable for its daily referendums, zero percent divorce rate, and compulsory vegetarianism. The compassionate, hard-working, democratic, devout population of 20.681 billion Richard Pettyians live in a state of perpetual fear, as a complete breakdown of social order has led to the rise of order through biker gangs.

The medium-sized, corrupt, liberal, pro-business government juggles the competing demands of Industry, Administration, and Education. It meets to discuss matters of state in the capital city of Level Cross NC. Citizens pay a flat income tax of 85.5%.

The frighteningly efficient Richard Pettyian economy, worth a remarkable 4,557 trillion 200 Victorieses a year, is fairly diversified and mostly comprised of black market activity, especially in Book Publishing, Soda Sales, Arms Manufacturing, and Retail. Average income is an amazing 220,383 200 Victorieses, but there is a large disparity between incomes, with the richest 10% of citizens earning 991,725 per year while the poor average 30,212, a ratio of 32.8 to 1.

After every storm there's an expensive government-funded rainbow, autumn landscape paintings feature men stripping leaves from bare branches with a vacuum, foreign leaders never seem to want to shake hands with Lee Petty, and the election for Lee Petty's office's janitor is heating up. Crime is totally unknown, thanks to a well-funded police force and progressive social policies in education and welfare. Richard Petty's national animal is the Seven Time NASCAR Champion, which teeters on the brink of extinction due to widespread deforestation, and its national religion is Agnostic Pantheism.

Richard Petty is ranked 5,471st in the world and 124th in NationStates for Fattest Citizens, with 21.62 Obesity Rate.