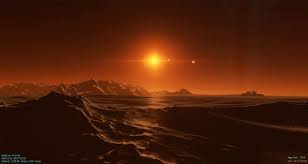 Proxima Centauri B Plus

The Colony of Proxima Centauri B Plus is a massive, environmentally stunning nation, ruled by Governor of Milky Way Sector 740 with an even hand, and renowned for its museums and concert halls, keen interest in outer space, and irreverence towards religion. The compassionate, democratic population of 4.492 billion Proxima Centauri B Plusieses are fiercely patriotic and enjoy great social equality; they tend to view other, more capitalist countries as somewhat immoral and corrupt.

The medium-sized government prioritizes Education, although Welfare, Law & Order, and Healthcare are also considered important, while Spirituality and International Aid are ignored. It meets to discuss matters of state in the capital city of PCBPCC. The average income tax rate is 26.5%, but much higher for the wealthy.

The large but inefficient Proxima Centauri B Plusian economy, worth 204 trillion slightly radioactive alloys a year, is led by the Book Publishing industry, with major contributions from Information Technology, Beef-Based Agriculture, and Automobile Manufacturing. State-owned companies are common. Average income is 45,441 slightly radioactive alloys, and distributed extremely evenly, with little difference between the richest and poorest citizens.

Crime is on the rise as DNA sampling has been all but outlawed, voting is compulsory, kids are arrested at gunpoint for playing with toy rifles, and Governor of Milky Way Sector 740 is frequently seen begging critics to stop insulting the government. Crime is totally unknown, thanks to a capable police force and progressive social policies in education and welfare. Proxima Centauri B Plus's national animal is the Moonbeam, which frolics freely in the nation's many lush forests, and its national religion is Science.

Proxima Centauri B Plus is ranked 105,463rd in the world and 3rd in NewZealand for Highest Drug Use, scoring 70.8 on the Pineapple Fondness Rating.