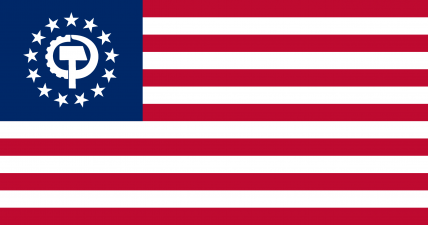 The Democratic Peoples Republic of Proletaire is a gargantuan, safe nation, remarkable for its prohibition of alcohol, anti-smoking policies, and stringent health and safety legislation. The compassionate, democratic population of 21.671 billion Proletairians enjoy a sensible mix of personal and economic freedoms, while the political process is open and the people's right to vote held sacrosanct.

It is difficult to tell where the omnipresent government stops and the rest of society begins, but it juggles the competing demands of Education, Welfare, and Environment. The average income tax rate is 99.4%.

The Proletairian economy, worth a remarkable 2,284 trillion dollars a year, is driven almost entirely by government activity. The industrial sector is solely comprised of the Book Publishing industry. Average income is an impressive 105,407 dollars, and evenly distributed, with the richest citizens earning only 2.5 times as much as the poorest.

Citizens are exhausted from weekly general elections, the inside lane of every highway is for parked vehicles only, glamping Proletairians won't sleep in a tent that doesn't include a Jacuzzi, and small businesses are gobbled up almost daily by corporate giants. Crime is totally unknown. Proletaire's national animal is the bald eagle, which soars majestically through the nation's famously clear skies.

Proletaire is ranked 195,244th in the world and 126th in The Internationale for Most Efficient Economies, scoring 48.89 on the Krugman-Greenspan Business Outlook Index.

The Latter Day Saint of Boats, and