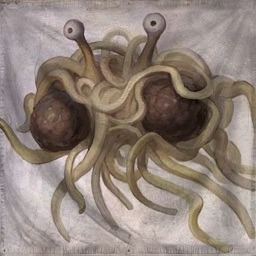 The Holy Empire of Pasta Pharia is a gargantuan, environmentally stunning nation, ruled by the Holy Meatball with an iron fist, and remarkable for its zero percent divorce rate, parental licensing program, and rampant corporate plagiarism. The hard-nosed, cynical, devout population of 19.992 billion Pasta Pharians are ruled without fear or favor by a psychotic dictator, who outlaws just about everything and refers to the populace as "my little playthings."

The government — a sprawling, bureaucracy-choked, corrupt, well-organized morass — juggles the competing demands of Law & Order, Environment, and Spirituality. It meets to discuss matters of state in the capital city of Spaghetti Junction. The average income tax rate is 88.3%.

The thriving Pasta Pharian economy, worth a remarkable 1,625 trillion noodles a year, is highly specialized and mostly made up of the Tourism industry, with significant contributions from Basket Weaving and Trout Farming. Average income is 81,317 noodles, and evenly distributed, with the richest citizens earning only 3.4 times as much as the poorest.

Disadvantaged neighbourhoods have become no-go areas after sundown, small children are learning a lot of new words from a teacher with Tourette Syndrome, the best-of-the-best athletes have been replaced by the best-of-the-mediocre, and the military patrols the streets in search of possible secessionists. Crime, especially youth-related, is totally unknown, thanks to the all-pervasive police force and progressive social policies in education and welfare. Pasta Pharia's national animal is the pirate, which frolics freely in the nation's many lush forests, and its national religion is Pastafarian.