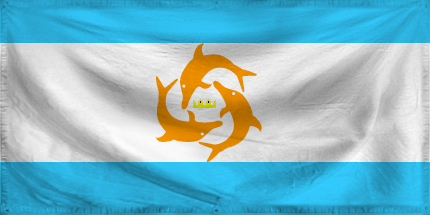 The Dolphin Confederation of Lys Deks Rahry is a massive, cultured nation, ruled by Jake Hughes with a fair hand, and renowned for its museums and concert halls, digital currency, and frequent executions. The compassionate, democratic, cheerful, devout population of 2.215 billion Rahryians hold their civil and political rights very dear, although the wealthy and those in business tend to be viewed with suspicion.

The large, liberal, outspoken government juggles the competing demands of Education, Administration, and Healthcare. It meets to discuss matters of state in the capital city of dolphin bay. The average income tax rate is 80.2%, and even higher for the wealthy.

The frighteningly efficient Rahryian economy, worth 249 trillion Souls a year, is highly specialized and mostly made up of the Information Technology industry, with significant contributions from Retail, Tourism, and Book Publishing. Average income is an impressive 112,734 Souls, and distributed extremely evenly, with little difference between the richest and poorest citizens.

Some people will do literally anything to be in the spotlight, the government is giving peace a chance, convicts released after being found "wrongfully imprisoned" are surprisingly chill about the whole thing, and Jake Hughes panders to nontraditional families. Crime is totally unknown. Lys Deks Rahry's national animal is the Dolphin, which frolics freely in the nation's sparkling oceans, and its national religion is the church of dolphins.

You Should See Me in a Crown,

Malachor XII, and 13 others.