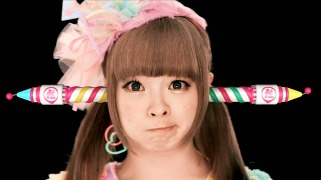 The Holy Cute Matriarchy of Kyary Pamyu Pamyu is a gargantuan, efficient nation, ruled by Kyary with an iron fist, and remarkable for its barren, inhospitable landscape, compulsory military service, and complete lack of prisons. The hard-nosed, hard-working, cynical, humorless, devout population of 16.066 billion people eaters are kept under strict control by the oppressive government, which measures its success by the nation's GDP and refers to individual citizens as "human resources."

The large, corrupt, well-organized government prioritizes Defense, although Industry, Law & Order, and Education are also considered important. It meets to discuss matters of state in the capital city of Pon Pon Pon. The average income tax rate is 97.1%.

The frighteningly efficient Kyary Pamyu Pamyuan economy, worth a remarkable 3,415 trillion PonPons a year, is broadly diversified and led by the Information Technology industry, with major contributions from Arms Manufacturing, Automobile Manufacturing, and Book Publishing. Black market activity is extensive. State-owned companies are reasonably common. Average income is an amazing 212,605 PonPons, but there is an enormous disparity between incomes, with the richest 10% of citizens earning 1,300,121 per year while the poor average 15,301, a ratio of 85.0 to 1.

Ethnic minorities are often refused admission to some of the nation's best schools, builders across Kyary Pamyu Pamyu are blocked up with orders for new public loos, the new "Bloodbath" orange tree autonomously seeks and destroys independent orchards, and directors of low-budget sci-fi films are flocking to use Pon Pon Pon as a backdrop. Crime, especially youth-related, is totally unknown, thanks to a well-funded police force and progressive social policies in education and welfare. Kyary Pamyu Pamyu's national animal is the Candy, which teeters on the brink of extinction due to widespread deforestation, and its national religion is Psychedelic Cuteness.

Kyary Pamyu Pamyu is ranked 47,128th in the world and 39th in Jenny for Fattest Citizens, with 13.04 Obesity Rate.