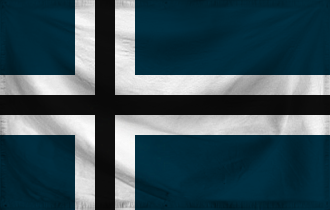 The Grand Norse Empire of Khuravia is a gargantuan, cultured nation, ruled by Niklas II with an iron fist, and remarkable for its frequent executions, otherworldly petting zoo, and stringent health and safety legislation. The hard-nosed, hard-working, cynical, humorless population of 17.472 billion Khuravians are kept under strict control by the oppressive government, which measures its success by the nation's GDP and refers to individual citizens as "human resources."

The relatively small, corrupt, moralistic, well-organized government is primarily concerned with Defense, although Industry, Education, and Healthcare are also considered important, while Social Policy and Welfare are ignored. It meets to discuss matters of state in the capital city of Keiservik. The average income tax rate is 42.0%.

The frighteningly efficient Khuravian economy, worth a remarkable 4,524 trillion silvurmarks a year, is broadly diversified and led by the Arms Manufacturing industry, with major contributions from Information Technology, Uranium Mining, and Retail. Black market activity is rampant. Average income is an amazing 258,934 silvurmarks, and evenly distributed, with the richest citizens earning only 3.3 times as much as the poorest.

Khuravia is ranked 256,187th in the world and 1,254th in Europe for Most Rebellious Youth, scoring -42 on the Stark-Dean Displacement Index.

Most Recent Government Activity: 89 minutes ago