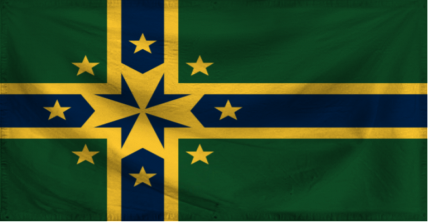 The Kingdom of Khevo is a gargantuan, safe nation, ruled by King Scott with an even hand, and renowned for its daily referendums, punitive income tax rates, and stringent health and safety legislation. The compassionate, democratic population of 13.891 billion Khevs are fiercely patriotic and enjoy great social equality; they tend to view other, more capitalist countries as somewhat immoral and corrupt.

The enormous government juggles the competing demands of Environment, Education, and Healthcare. It meets to discuss matters of state in the capital city of Arhelm. The average income tax rate is 85.2%, and even higher for the wealthy.

The Khevic economy, worth a remarkable 1,001 trillion Pels a year, is quite specialized and led by the Tourism industry, with significant contributions from Information Technology, Book Publishing, and Trout Farming. State-owned companies are reasonably common. Average income is 72,131 Pels, and distributed extremely evenly, with little difference between the richest and poorest citizens.

Neon signs promoting safe driving often distract drivers, environmentalists are advocating slash-and-burn in the nation's forests, a video of King Scott wearing shock-blue face paint and smashing an electric guitar in front of a frenzied crowd is on endless repeat on the nightly news, and Khevic politicians are often described as having more style than substance. Crime is totally unknown, thanks to a well-funded police force and progressive social policies in education and welfare. Khevo's national animal is the Barn Swallow, which soars majestically through the nation's famously clear skies, and its national religion is Cyism.

Khevo is ranked 243,667th in the world and 359th in The Union of Democratic States for Fattest Citizens, with 7.48 Obesity Rate.