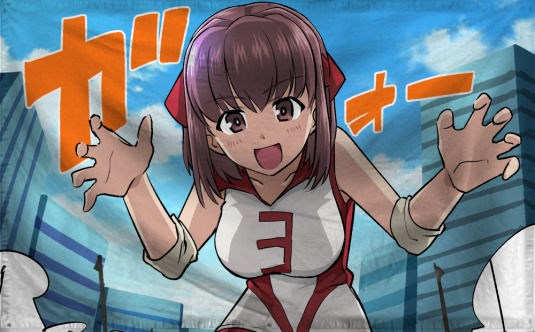 The Queendom of Kaiju Girl is a massive, efficient nation, ruled by Meg Agodzilla with an iron fist, and notable for its infamous sell-swords, absence of drug laws, and suspicion of poets. The hard-nosed, hard-working, cynical, humorless, devout population of 2.306 billion itty-bittys are ruled with an iron fist by the corrupt, dictatorship government, which oppresses anyone who isn't on the board of a Fortune 500 company. Large corporations tend to be above the law, and use their financial clout to gain ever-increasing government benefits at the expense of the poor and unemployed.

The relatively small, corrupt, moralistic, pro-business, well-organized government juggles the competing demands of Defense, Law & Order, and Spirituality. It meets to discuss matters of state in the capital city of Tokyo. Citizens pay a flat income tax of 23.4%.

The frighteningly efficient itty-bitty economy, worth 290 trillion scales a year, is broadly diversified and led by the Soda Sales industry, with major contributions from Gambling, Retail, and Pizza Delivery. Black market activity is extensive. Average income is an impressive 126,130 scales, but there is an enormous disparity between incomes, with the richest 10% of citizens earning 796,051 per year while the poor average 8,366, a ratio of 95.1 to 1.

The newest East Lebatuckese coins have "long live East Lebatuck" on heads and "death to Kaiju Girl" on tails, police officers ride the swiftest giant robots, cute fluffy little Meg Agodzillas are increasingly popular exotic pets, and Meg Agodzilla's Twitcher account is typically used to share giant robot memes rather than government policy. Crime, especially youth-related, is totally unknown, thanks to a well-funded police force. Kaiju Girl's national animal is the giant robot, which teeters on the brink of extinction due to widespread deforestation, and its national religion is Megism.

Kaiju Girl is ranked 151,924th in the world and 101st in Jenny for Most Rebellious Youth, scoring -3 on the Stark-Dean Displacement Index.