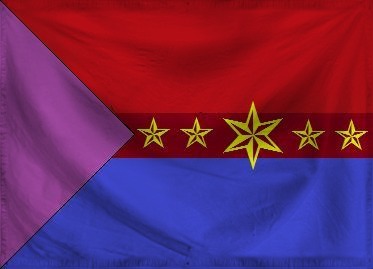 The People's Empire of Jeronma is a gargantuan, safe nation, ruled by 1st Chairman Joe Wilbersky with an even hand, and notable for its frequent executions, keen interest in outer space, and anti-smoking policies. The hard-nosed population of 25.166 billion Jerons have some civil rights, but not too many, enjoy the freedom to spend their money however they like, to a point, and take part in free and open elections, although not too often.

The government — a sprawling, bureaucracy-choked, corrupt morass — juggles the competing demands of Defense, Healthcare, and Education. It meets to discuss matters of state in the capital city of Londeria City. The average income tax rate is 95.2%.

The frighteningly efficient jeeron economy, worth a remarkable 2,729 trillion Jeronma Yis a year, is highly specialized and mostly made up of the Arms Manufacturing industry, with significant contributions from Book Publishing, Tourism, and Soda Sales. Black market activity is frequent. State-owned companies are reasonably common. Average income is an impressive 108,455 Jeronma Yis, and distributed extremely evenly, with little difference between the richest and poorest citizens.

Just as students finish their homework it's time for school, families waiting for delayed pipe installations hope daily for rain, condos feature wall-mounted cages containing endangered animals, and a third of Jerons are e-certified CEOs. Crime, especially youth-related, is totally unknown, thanks to the all-pervasive police force and progressive social policies in education and welfare. Jeronma's national animal is the Ostrich, which frolics freely in the nation's many lush forests, and its national religion is not existent.

Jeronma is ranked 9,431st in the world and 1st in The Genesis Corporation for Most Advanced Public Education, scoring 11,136.43 on the Edu-tellignce® Test Score.

Most Recent Government Activity: 47 days ago