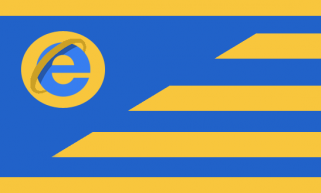 The Irrelevant Internet Browser of Internet Explorer is a gargantuan, socially progressive nation, ruled by Bill Gates with an even hand, and remarkable for its enslaved workforce, complete lack of public education, and suspicion of poets. The hard-nosed, hard-working, cynical, humorless population of 19.77 billion technical illiterates are either ruled by a sleek, efficient government or a conglomerate of multinational corporations; it's difficult to tell which.

The minute, corrupt, pro-business government, or what there is of one, is solely concerned with Industry. It meets to discuss matters of state in the capital city of Bing. Income tax is unheard of.

The frighteningly efficient technically illiterate economy, worth a remarkable 3,752 trillion cookies a year, is driven almost entirely by the private sector, which is broadly diversified and led by the Gambling industry, with major contributions from Information Technology, Retail, and Automobile Manufacturing. Average income is an impressive 189,818 cookies, but there is a vast disparity between incomes, with the richest 10% of citizens earning 1,743,599 per year while the poor average 2,150, a ratio of 810 to 1.

A Capitalist Paradise Tourist Association survey has rated Internet Explorer #1 for number twos, justice is available only to those who can afford its price tag, the space program has been reduced to Bill Gates's nephew playing with a cardboard space shuttle, and freighter lifeboats have been replaced by state of the art marker buoys so divers can recover the cargo after they sink. Crime, especially youth-related, is all-pervasive, probably because of the absence of a police force. Internet Explorer's national animal is the error message, which teeters on the brink of extinction due to widespread deforestation.

Internet Explorer is ranked 20,653rd in the world and 72nd in Capitalist Paradise for Most Influential, scoring 2,219 on the Soft Power Disbursement Rating.