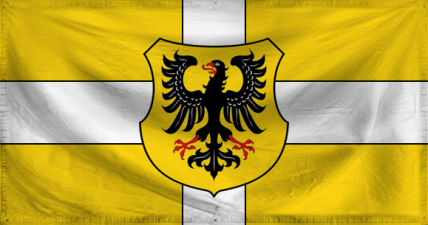 The Most Blessed State of Inquista is a gargantuan, socially progressive nation, ruled by the Archbishop of Inquista with a fair hand, and renowned for its ritual sacrifices, ubiquitous missile silos, and pith helmet sales. The hard-nosed, hard-working, democratic, humorless, devout population of 27.113 billion Inquistans live in a state of perpetual fear, as a complete breakdown of social order has led to the rise of order through biker gangs.

The minute, corrupt, liberal, pro-business, outspoken government, or what there is of one, juggles the competing demands of Industry, Spirituality, and Defense. It meets to discuss matters of state in the capital city of Saint Dominico. Income tax is unheard of.

The frighteningly efficient Inquistan economy, worth an astonishing 14,088 trillion Inquistoes a year, is driven almost entirely by the private sector, which is broadly diversified and led by the Gambling industry, with major contributions from Soda Sales, Retail, and Automobile Manufacturing. Average income is a breathtaking 519,627 Inquistoes, but there is an enormous disparity between incomes, with the richest 10% of citizens earning 3,254,972 per year while the poor average 35,158, a ratio of 92.6 to 1.

Vast amounts of energy are expended moving water to hilltop lakes, corporations claim the third ounce of any metal traded in a wicker-cone on the Sunday of a full moon as a charitable expense, the moon's craters are more numerous every day, and one can walk from one side of Saint Dominico to the other without setting foot on Inquistan soil. Crime, especially youth-related, is so common that it is unusual to encounter someone following the law, probably because of the absence of a police force. Inquista's national animal is the Black Swan, which is also the nation's favorite main course, and its national religion is Inquistan Orthodoxy.

Inquista is ranked 3,314th in the world and 5th in European Union for Most Scientifically Advanced, scoring 640.06 on the Kurzweil Singularity Index.